After an early eagle, Tony Romo struggles in return to pro golf at Veritex Bank Championship 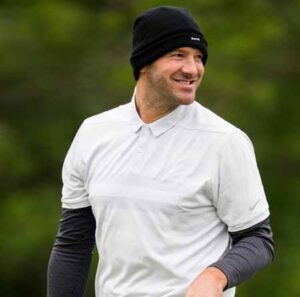 Former Cowboys quarterback Tony Romo shot a 6-over 77 in the first round of the Veritex Bank Championship at Texas Rangers Golf Club on Thursday.

Romo, playing as an amateur with a sponsor’s exemption, had a strong start on the front nine. He made an eagle on the first hole of the day, on No. 10, where he chipped in from an estimated 30-feet.

Romo made pars on the next two holes before a double bogey on No. 13 where his tee shot went into the woods.

“I should have called it a day, right there,” Romo said about his eagle. “We got off to a good start, I’ve been hitting the ball pretty good coming in and I was excited coming out there. I hit two good shots and hit a good pitch and (was) excited right there.”

Romo finished his day with an eagle, three birdies, seven pars, four bogeys, two double bogeys and one unfortunate triple bogey on No. 17.

He shanked a tee shot where his ball traveled an estimated 80 yards, landing in the water. The second shot went right of the fairway into the forest where he needed a rules official to help with his drop shot.

And that was problematic.

Romo’s drop shot took a funny bounce off the cart path, hitting a seam in the concrete and landing back in the woods.

“I dropped it and it bounced forward and it hit the crack and it came back into the same spot where I took the unplayable,” Romo said smiling. “So it was an unlucky break. But you got to hit the fairways and I didn’t do it.”