Anders Albertson leads after first round at Veritex Bank Championship 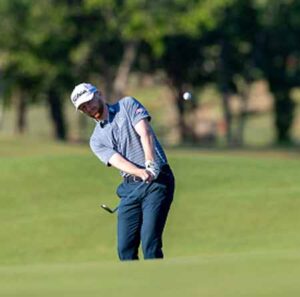 ARLINGTON, Texas – Anders Albertson posted a 9-under 62 on Thursday to take the first-round lead at the inaugural Veritex Bank Championship in Arlington, Texas. Albertson leads Max Greyserman by one stroke at Texas Rangers Golf Club entering the second round.

“I didn’t really think about a number [coming in],” said Albertson. “I played with Kris [Blanks] and Kevin [Dougherty] today and it’s a very fine line. If you get one foot off a slope and you slide down, you’re short-sided. Or if you catch the slope and come down you have a tap-in. It’s a very fine line between hitting a good shot and being in a very difficult position.”

“Not too common…It was awesome,” laughed Albertson. “It was my second one ever and both have been in contention. Which is nice, I guess if you’re not going to have very many [aces], you better make them count.”

The Atlanta native tacked on two more birdies at the third and seventh holes before a closing eagle at the par-5 ninth to reach 9-under.

“There are a lot of different quadrants of the greens with the slopes here,” noted Albertson. “I think if you can hit some really good iron shots, you can have some good looks at birdie. We had a good plan coming in and I hit some good irons and fortunately I made those putts.”

Coming off two top-10s in his last three starts, Max Greyserman carded an 8-under 63 to sit one shot back of Albertson.

“I feel like I’m playing solid this year,” said Greyserman, who lives in Boca Raton, Florida. “It was good to see Svenny [Adam Svensson] win in Georgia and Peter [Uihlein] win in Vegas, two guys that I’m friends with at home and two guys that I play with a lot. Just knowing that I can do it too, gaining some confidence, and if a bad shot happens just keep going.”

Four players are T3 after the first round at 7-under 64: Jonathan Randolph, Joey Garber, Theo Humphrey and Dan McCarthy.