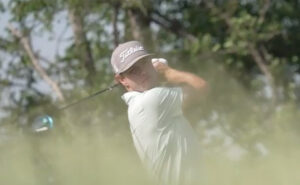 Playing in the final pairing with 36-hole leader and native Texan Shawn Stefani, Parker carded seven birdies against one bogey and took a one-stroke lead over Taylor Montgomery. Parker also holds a three-stroke lead over Stefani, a two-time Korn Ferry Tour winner, and defending champion Tyson Alexander, who turned at even par but played his first five holes of the back nine at 6-under par and turned in a second consecutive 5-under 66.

Parker carded a 5-under 30 on the front nine, making birdies on the final three holes and extending his run with another birdie at the par-5 10th. Parker, who turned 31 earlier this month, made his only bogey of the day at the par-4 11th, but rebounded with a birdie at the par-3 12th. The Augusta, Georgia native closed his round with six consecutive pars and secured his second 54-hole lead on the Korn Ferry Tour, and his first since sharing the 54-hole lead at the 2017 The Bahamas Great Abaco Classic at The Abaco Club, where he posted his career-high finish of solo fourth.

“I would not say it’s a familiar feeling because I have not been in this position in quite a while,” Parker said. “A golf tournament is a golf tournament. I’ve been in contention plenty of times over the last couple years at golf tournaments. This one is just a little bigger.”

The University of Kentucky alum turned professional in 2014, playing mostly mini-tours until earning Korn Ferry Tour membership and guaranteed starts via a T14 finish at Final Stage of the Korn Ferry Tour Qualifying Tournament in December of 2016. Parker found immediate success as a rookie, finishing T28, fourth, and T38 in his first three starts. His season spiraled downward thereafter, as Parker missed the cut in 15 of his final 18 starts of 2017.

Parker returned to Final Stage in winter 2017, but left without guaranteed starts for 2018 and fell back to the mini-tours. Medalist honors at one of the 2019 PGA TOUR Canada Q-School sites earned him fully exempt status for the season, but he only made four cuts in 11 starts and was once again relegated to the mini-tours for all of 2020 and 2021.

Prior to trek through the Korn Ferry Tour Qualifying Tournament last year, Parker considered leaving the game behind but ultimately gave himself another chance. Parker qualified for Final Stage on the number at the Dothan, Alabama site of Second Stage, making a gritty par on his 72nd hole.

“I put basically my entire life into it,” Parker said. “I really felt like I was very close to quitting the game last year and doing something else, and some stuff happened and I was able to get through Q-School. I did not have a very good year last year and just started playing well at the end of the year, got through to Final (Stage) and got status, so I couldn’t hang it up then.”

A T105 finish at Final Stage last November once again left Parker buried on the priority ranking and without guaranteed starts. A sponsor exemption for the second event of the season, The Bahamas Great Abaco Classic at the Abaco Club, ended with a T47 finish and allowed Parker to climb the priority ranking via the reshuffle, which took effect two events later.

Parker played the last three Korn Ferry Tour events, making two cuts and posting a T17 at the Lake Charles Championship, his first top-25 since the solo fourth at the 2017 The Bahamas Great Abaco Classic at The Abaco Club.

“That’s just such a big deal getting one of the first eight,” Parker said of the sponsor exemption. “There are so many different kinds of pressures in golf. Q-School, you got to do it or you’re going home; you’re done for the year. There is pressure to make the cut every week, if you’re on that border. Then there is pressure to win golf tournaments. There are so many different weird kinds of pressures.

“Leading a golf tournament, you’re obviously playing well, so you have some confidence under that pressure as well.”