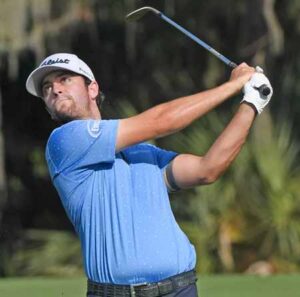 Davis Riley plays a shot on the first hole during the third round of the Korn Ferry Tour Club Car Championship at The Landings Club-Deer Creek Course on March 27, 2021 in Savannah, Georgia. (Photo by Stan Badz/PGA TOUR)

DALLAS (CBSDFW.COM) – Dallas resident Davis Riley is playing in the Korn Ferry Tour’s Veritex Bank Championship this weekend in Arlington, but he hopes to be making a living on the PGA Tour soon.

“If not for Covid I would already be on the Tour.” Riley told CBS 11 Sports.

While the pandemic has delayed his dream, Riley can make it a reality this weekend with a win at the Texas Rangers Golf Course in Arlington.

Riley enters the Veritex Bank Championship with two wins on the Korn Ferry Tour, which is the developmental tour for the PGA.

His next Korn Ferry victory makes him eligible for the big time.

“If you win three times, you’re on the (PGA) tour the next week after you win.” Riley said with a smile “So hopefully I get that done in Dallas.”

Speaking of Dallas, Riley has ties to Masters runner-up and Trinity Christian Academy Alumnus, Will Zalatoris.

The two met while competing in junior and college golf tournaments.

Eventually Riley and Zalatoris were roommates when Riley moved to Dallas in 2019.

“When we are competing, we are competing, but at the end of the day, we are good friends.” is how Riley described his friendship with Zalatoris. “How cool would it be if one day we were fighting for a major championship, or on the same Ryder Cup Team together.”

Which leads us back to Riley’s dream.

“To be the best player of the world one day, that’s been a dream of mine since I was a little kid.”

Riley can take another step in making that dream come to life this weekend.