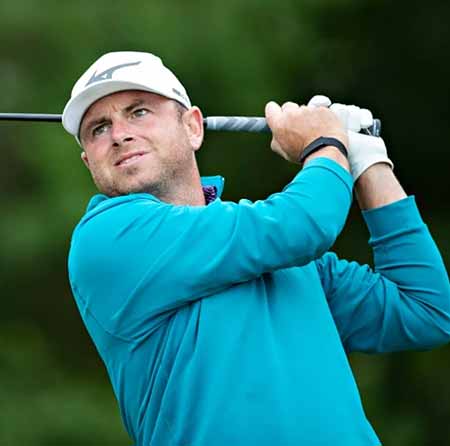 McCarthy backed up his 64 with a 63 on Friday to grab the lead in Arlington. (Wesley Hitt/Getty Images)

ARLINGTON, Texas – Dan McCarthy followed up his first-round 64 with a 63 on Friday morning to reach 15-under through 36 holes before heavy rain forced the suspension of play at the Veritex Bank Championship in Arlington, Texas. Play was suspended due to lightning in the area at 12:57 p.m. CT before play was eventually called for the day at 3 p.m. CT after heavy rainfall at Texas Rangers Golf Club.

The second round will resume at 7:30 a.m. CT on Saturday morning with the third round following on Saturday afternoon.

“It’s cliché but it was pretty simple; I hit a lot of fairways and hit a lot of greens,” said McCarthy matter-of-factly. “I played the par-5s mostly pretty well. For the most part I hit it really solid and was rolling it pretty nicely and I made a couple of par saves to keep the momentum going. It’s been really solid all around.”

McCarthy started with birdies on two of his first three holes and was inches from holing out at the par-4 14th before settling for a tap-in birdie. He went on to birdie two of his last three holes en route to the 63.

“The game didn’t feel particularly good honestly, I had a terrible weekend out in Vegas and played like crap on Wednesday out in the Pro-Am,” laughed McCarthy. “It’s mostly been the putter. I’ve given myself a lot of opportunities. I’ve rolled it really nice…You have to be so patient. Some weeks you’re not going to have anything going, and some weeks you’re not going to feel good but all the sudden it’s going to click on. You never know when it’s going to happen and it really is just the battle of the patience. I’m just trying to be ultra-patient.”

With play suspended at 12:57 p.m., overnight leader Anders Albertson had only completed one hole in his second round before play was stopped. He birdied the par-4 first hole to reach 10-under. Carl Yuan carded a second-round 64 to reach 11-under and currently sits solo-second.

Former Dallas Cowboys quarterback Tony Romo, competing in the field as an amateur, will tee off in his second round at approximately 8:50 a.m. on Saturday off of the first tee.