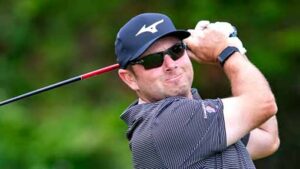 McCarthy made three birdies through 10 holes on Saturday afternoon to keep a share of the lead. (Wesley Hitt/Getty Images)

ARLINGTON, Texas – Dan McCarthy and Dallas resident Theo Humphrey each finished their second round at 15-under and reached 18-under through the first 10 holes of their third round before play was suspended due to darkness at 7:53 p.m. Brett Drewitt (thru 15 holes) and Chandler Phillips (thru 14) sit one stroke back during their respective third rounds at the Veritex Bank Championship.

The third round will resume at 7:30 a.m. on Sunday followed directly by the final round, which will tee off from 10 a.m. to noon (approximately).

McCarthy, who finished his second round on Friday, had to wait until 5:01 p.m. on Saturday to begin his third round. He carded three birdies over his first 10 holes (Nos. 3, 7 and 10) to reach 18-under when play was suspended.

“I hit a couple of loose shots today, but that’s kind of to be expected after kind of a long wait between yesterday and today,” said McCarthy. “It will be a busy today tomorrow so it’s time to get some rest.”

The 35-year-old from Syracuse, New York, has previously won on the Korn Ferry Tour at the 2019 Club Car Championship at The Landings Club but has never earned his PGA TOUR card.

Humphrey, a 25-year-old, is a local resident who estimated he had played 12-15 practice rounds out at Texas Rangers Golf Club. He carded an early bogey during his third round but rebounded with birdies at five and eight and an eagle at the par-5 ninth to reach 18-under.

“They say you’re not supposed to think about that [winning], but we all do,” laughed Humphrey. “Before the week I thought to myself I want to be here with a chance on Sunday and I think if I just keep doing what I’m doing that I’ll have a chance. I think I can get it done.”

Drewitt sits one stroke back, along with Texan Chandler Phillips, who is competing in his fourth career event on the Korn Ferry Tour.