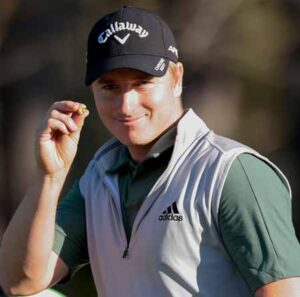 One Korn Ferry Tour player was almost disqualified this past weekend after getting stuck in an elevator.

Nick Voke and his caddie, Leonard Powell, hopped in the lift at their Arlington, Texas, hotel at 6:13 a.m. Saturday to head to Texas Rangers Golf Club so Voke could complete the final hole and a half of his suspended second round of the Veritex Bank Championship. That’s when the elevator suddenly stopped between floors.

“It was funny for like five minutes,” Powell said. “We were just sitting there on our phones, put it on Instagram, and then it was like, ‘Ooh, this isn’t actually moving.’”

After several calls to the receptionist went unanswered, Voke dialed the tour and was informed that despite his circumstances he would be disqualified if he missed the restart. What started out with Voke playfully stroking putts on the elevator floor turned into a bit of panic.

“We were standing up, we were honking everything, jamming on the door.” Voke said. “We were trying to pry the thing open and no luck.”

Voke even contemplated climbing out the top of the elevator and finding a new caddie for the morning.

Luckily, after 46 minutes in the lift, the two were freed by a friend who got in touch with the elevator technician and reset it himself. Voke arrived at the course in time to get in 10-20 minutes of warmup before going birdie-par to make the cut by a shot.

The 26-year-old Iowa State product by way of New Zealand then returned a third-round 65 before ultimately tying for 46th.