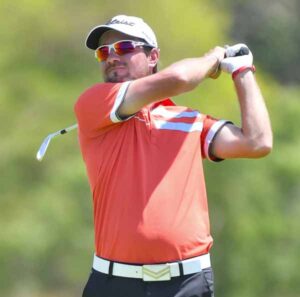 Toni Hakula led the way at Monday’s open qualifier for the inaugural Veritex Bank Championship, blistering Trophy Club CC to the tune of 10-under 62 and earning a spot in this week’s field at Texas Rangers GC in Arlington, Texas.

Hakula, who resides in Austin, Texas, began his round Monday with six consecutive birdies and didn’t let up. He added four more birdies on the day, and he refrained from recording a single over-par score.

The University of Texas alum, 29, is set for his fourth career Korn Ferry Tour start, his first since the 2019 Pinnacle Bank Championship presented by Aetna.

The Finland native has spent time on both PGA TOUR Latinoamerica and the Mackenzie Tour-PGA TOUR Canada throughout his eight-year professional career, and he captured his first TOUR-sanctioned title at the 2018 Bupa Match Play, the first match-play event in the history of PGA TOUR Latinoamerica.

Hakula was also a member of the Longhorns’ 2012 NCAA Championship-winning team, with teammates including Jordan Spieth, Dylan Frittelli and Cody Gribble.

Jared du Toit, Zack Fischer and Luke Gannon shared medalist honors at The Bridges GC, each carding 7-under 65 to secure tee times this week in the Dallas-Fort Worth metroplex.

In all, 276 players competed for eight spots in this week’s field at Texas Rangers GC.

For all scores from Trophy Club CC, click here.

For all scores from The Bridges GC, click here.