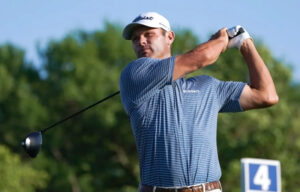 ARLINGTON, Texas – Two-time Korn Ferry Tour winner Shawn Stefani played his last four holes at 5-under par at Texas Rangers Golf Club Thursday afternoon, taking the outright 36-hole lead at the Veritex Bank Championship. Playing in his home state, Stefani’s birdie-eagle-birdie-birdie finish on the back nine moved him to 14-under par for the tournament, one stroke ahead of Chase Parker.

Stefani’s fantastic finish, highlighted by a chip-in eagle at the par-4 16th, solidified an 8-under 63, tying his second-lowest round in PGA TOUR-sanctioned play. In 770 previous rounds (587 and on the PGA TOUR, 183 on the Korn Ferry Tour), Stefani’s career-low round was a 9-under 62 in the third round of the 2012 Miccosukee Championship, which propelled him to his second Korn Ferry Tour win. Thursday’s round also marked his fourth round of 63 or better in PGA TOUR-sanctioned play, and his first since a 9-under 63 at the PGA TOUR’s 2015 The American Express.

Although Stefani holds his first 36-hole lead in a Korn Ferry Tour event, the 40-year-old Texan previously held a 36-hole lead on the PGA TOUR at the 2013 Valspar Championship, where he eventually finished T7.

“I’ve been doing a lot of work on my golf swing this year and I’ve seen a lot of improvement and a lot of things that are starting to go my way,” said Stefani, a Houston resident who began working with University of Houston Director of Golf Jonathan Dismuke this year. “I tried to change my mindset this week, to just try and be a little more patient, and I did and it’s helped.”

Stefani began the day three strokes behind outright leader MJ Daffue, a fellow Lamar University alum, and played his first eight holes at even par with two birdies (Nos. 4 and 7) and two bogeys (Nos. 3 and 8). The Baytown, Texas native reached the par-5 ninth in two and made his eagle putt to turn at 2-under par. Stefani added birdies at the par-5 10th and par-3 12th, but dropped a stroke at the par-4 14th.

“I was really struggling with my swing towards the middle of the round and I just kept fighting and staying patient,” Stefani said. “I made one good swing on the par 3 (No. 15) and said ‘Oh, okay, there it is,’ then stuck with that swing thought, then just let it go after that. I chipped one in on No. 16 for eagle, hit two great shots on No. 17 and three great shots on No. 18, so it’s nice when what you’re trying to do happens.”

Stefani turned professional out of Lamar University in 2005, playing mostly mini-tours until earning Korn Ferry Tour membership via PGA TOUR Q-School in December 2011. As a Korn Ferry Tour rookie in 2012, Stefani won the AdventHealth Championship and Miccosukee Championship as he finished sixth on the 2012 money list and earned a PGA TOUR card.

Playing the last nine seasons on the PGA TOUR, Stefani recorded 12 top-10s, including runner-up finishes at the 2014 Quicken Loans National and 2014 World Wide Technology Championship at Mayakoba. He also made three consecutive FedExCup Playoffs appearances from 2014 through 2016.

“I can’t say, mentally, that I’ve been my best, but the last couple of weeks I’ve really tried to focus more on the mental side of things,” Stefani said. “I feel like I was doing some good stuff, but getting in my own way… playing well, then making some mistakes, mentally not being committed or trusting my golf swing. I’ve tried to change the mindset to just come out here and play golf, try not to be perfect. It’s funny, but when you have that mindset of acceptance, great things usually happen, and great things have happened the last couple of days.”