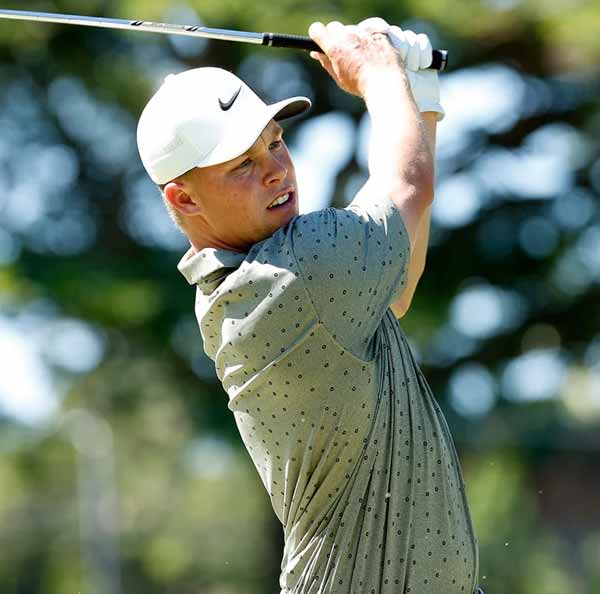 Nick Hardy is one to watch at the Veritex Bank Championship. (Cliff Hawkins/Getty Images)

The par-71 track measures 6,987 yards and holds the distinction of being the world’s only Major League Baseball-branded golf club. During last year’s pandemic hiatus, 2019 Korn Ferry Tour Player of the Year Scottie Scheffler carded a 59 in a casual round with friends, punctuated by a 20-foot eagle on the closing hole.

This week’s field will aim to follow Scheffler’s lead and make birdies in bushels, in hopes of moving up the Korn Ferry Tour Points List by Sunday afternoon.

Who’s slated for a big week in the Dallas-Fort Worth metroplex? Here are 10 players to watch.

1. Nick Hardy. The University of Illinois alum has seemingly done everything but win this season, with 14 top-25s in 27 starts, including a final-round 60 at this month’s Emerald Coast Classic. He’s fresh off a T5 in Las Vegas.

2. Lee Hodges. The Alabama alum made a heroic Friday run at last week’s MGM Resorts Championship, carding 6-under 66 to make his 17th consecutive cut. The beacon of consistency stands No. 6 on The 25.

3. Max McGreevy. The Oklahoma alum now lives in Dallas and enters the week on the strength of four consecutive top-20 finishes, including a runner-up at last month’s Club Car Championship.

4. Davis Riley. The two-time Korn Ferry Tour winner was in the mix for a Three-Victory Promotion last week in Las Vegas before finishing T17. With a win this week, Riley would beat his former roommate Will Zalatoris to TOUR membership.

5. Braden Thornberry. The Ole Miss alum has recorded three top-15s in his past five starts, including a T5 at last week’s MGM Resorts Championship, moving to No. 43 on the Points List as he eyes his first TOUR card.

6. Taylor Moore. The Arkansas alum is proudly based in Dallas and will bring good vibes to Texas Rangers GC as he aims to build on a solo-fourth finish at last week’s MGM Resorts Championship, which vaulted him to No. 44 on The 25.

7. Sahith Theegala. The Pepperdine alum has taken the Korn Ferry Tour by storm this spring with two top-20s in three starts, including a T9 in Las Vegas to earn a spot in this week’s field.

8. Ollie Schniederjans. The Georgia Tech alum resides in Atlanta but was born in Dallas, and he’ll embrace a return to his birthplace as he strives to improve on his No. 41 position on the Points List.

10. Taylor Dickson. The Winthrop alum grew up in Gastonia, North Carolina and is close friends with Harold Varner III, who recorded a TOUR-best runner-up at last week’s RBC Heritage. Dickson will be inspired to follow Varner’s lead.