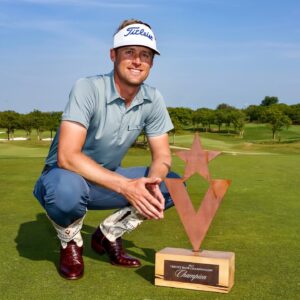 ARLINGTON, Texas – What a week it was for Tyson Alexander.

Upon arriving for the second playing of the Veritex Bank Championship, Alexander pulled into Texas Rangers Golf Club’s parking lot and found a space reserved for the defending champion. Monday night, Alexander was sized for a pair of cowboy boots from Lucchese Boot Company, a new addition to the winner’s haul and another perk of being the event’s first champion. Alexander played Tuesday’s pro-am alongside four-time PGA TOUR winner Ryan Palmer, a Veritex Bank ambassador, and former NBA player and head coach Avery Johnson. The night before Wednesday’s opening round, Alexander joined the likes of former President of the United States George W. Bush, Matthew McConaughey, and Jordan Spieth when he threw out the honorary first pitch for the Texas Rangers’ second home game of the season.

“Honestly, I was really excited to be done with everything,” Alexander said of the pre-tournament festivities. “I was excited to play the first round of golf because I could just focus on golf and do my thing. Throwing the first pitch out is great, getting cowboy boots for the first time is cool, but I just kept telling myself, ‘Hey, we’re here for a golf tournament; we’re here to play good.’ I was excited to tee it up and get going.”

Alexander capped it all off Saturday with the first successful title defense in the history of the Korn Ferry Tour, established in 1990, winning the Veritex Bank Championship for a second consecutive year.

“Whenever you can be the first person to do something, I think that’s cool,” Alexander said. “Back in college, I won the Azalea Invitational two years in a row (2009 and 2010), so I kind of kept thinking about that. I’ve played good golf on this course before, won back-to-back tournaments before. I just kept saying that I’d done this before.”

On a day when the scoring average was 66.90, breaking the Korn Ferry Tour’s single-round record of 66.908 established at last year’s Memorial Health Championship presented by LRS, Alexander carded a bogey-free 6-under 65 and reached 22-under par for a two-stroke victory, holding off rookie Pontus Nyholm, one of five players who tied the tournament’s 18-hole scoring record in the final round with a 9-under 62, and Byeong Hun An, a past PGA TOUR member who won on the Korn Ferry Tour this year.

Alexander began the final round three strokes off the 54-hole lead, but as the final pairing struggled on the front nine, he went out with a “stress-free” 4-under 31 and birdied Nos. 2, 5, 7, and 9. A birdie at the par-5 10th gave him the outright lead at 21-under par.

A crucial sand save at the par-4 14th, the fifth-toughest hole Saturday, kept Alexander atop the leaderboard and provided practically the only drama down the stretch. A missed birdie putt inside of 3 feet at the par-4 17th left the door open for Taylor Montgomery in the final pairing, but Alexander sealed the win with an up-and-down birdie from just off the front of the green at the par-5 18th.

“The back nine, I still had a bunch of good looks, but I just couldn’t make a birdie putt,” Alexander said of his seven consecutive pars from Nos. 11-17. “I just felt like I was in control. I always tell people, when you’re playing well it’s like it’s a good nervous. When I’ve got my good stuff and I’m playing well, I’m excited.”

This week, Alexander carded bookend 65s with a pair of 5-under 66s in between. Last year’s win began with a 4-udner 67, followed by consecutive 65s and a 7-under 64 in the final round.

“I thought the first one was harder. My track record coming in here was crappy,” said Alexander, who had six missed cuts and a withdrawal in nine starts (and was without a top-25 in 13 starts) ahead of last year’s Veritex Bank Championship. “I remember going into Sunday just trying to have a good finish. Next thing you know, I was in the mix and it happened. This one felt kind of different. I felt like, I know this place well, I’m playing well. Why not me?’

Everything about the second win was sweeter for Alexander. For starters, the winner’s check was bigger, as the Korn Ferry Tour increased its purses ahead of the 2022 season. More importantly with respect to Alexander’s goals, it put him in a far better position on the Korn Ferry Tour Points List.

Last year’s win, Alexander’s first on the Korn Ferry Tour, took him from No. 88 to No. 31 on the 2020-21 Korn Ferry Tour Regular Season Points List. The win afforded him a two-year exemption, but given the nature of the combined 43-event regular season, Alexander still faced an uphill climb to his first PGA TOUR card. He eventually finished No. 44 on last season’s points list.

This time around, Alexander’s win catapulted him from No. 73 to No. 8 on the points list, and within 300 points (equivalent to a solo second finish) of the 900-point threshold the Korn Ferry Tour is currently using as its fail-safe threshold for players to finish among The 25 and earn a PGA TOUR card at regular season’s end.

Alexander hopes to eventually follow in the footsteps of his grandfather, Skip Alexander, who won three times on the PGA TOUR and represented the United States in the 1949 and 1951 Ryder Cups. Tyson could soon emerge from the shadow of his father, Buddy Alexander, as well. Buddy won the 1986 U.S. Amateur Championship and two national championships as head coach of the University of Florida men’s golf program, which he helmed for 27 seasons from 1988 through 2014.

In an interview after last year’s win, Tyson, who played for his father at Florida and turned professional after his senior season in summer 2010, smiled and said, “I’ve always grown up being Buddy’s son. I’m working on becoming Tyson’s dad one day.”

Where does Tyson see himself after a second Korn Ferry Tour win, a historic one to boot, and his first PGA TOUR card within reach?

“I’m going to keep going,” Alexander said. “I still think there are people out there that know my dad from the past and what he’s done in coaching and playing… but I like where I’m trending.”

The 2022 Korn Ferry Tour season continues Thursday, April 28 with the first round of the Huntsville Championship at The Ledges in Huntsville, Alabama.